Two years ago, I was sitting in my principal’s office trying to decide which sessions to take at the annual Turnaround Arts Summer Leadership Retreat. This was going to be our first year as a Turnaround Arts: California partner school, and I wanted to make sure I was signing up for classes that would best benefit me as a new music teacher and in implementing arts integration at my school. I now had my dream job — I stepped out of the general education classroom after 13 years to become the music teacher/Arts Coordinator at Florence Griffith Joyner Elementary. I had a music credential because that was my major in college, but I had never taught music before — I had no idea where to start. When I saw a class called “Little Kids Rock, Modern Band” I thought, “hmmm, that sounds interesting!” To top it off, they told us that they would tell us how to get free instruments, so I immediately signed up. 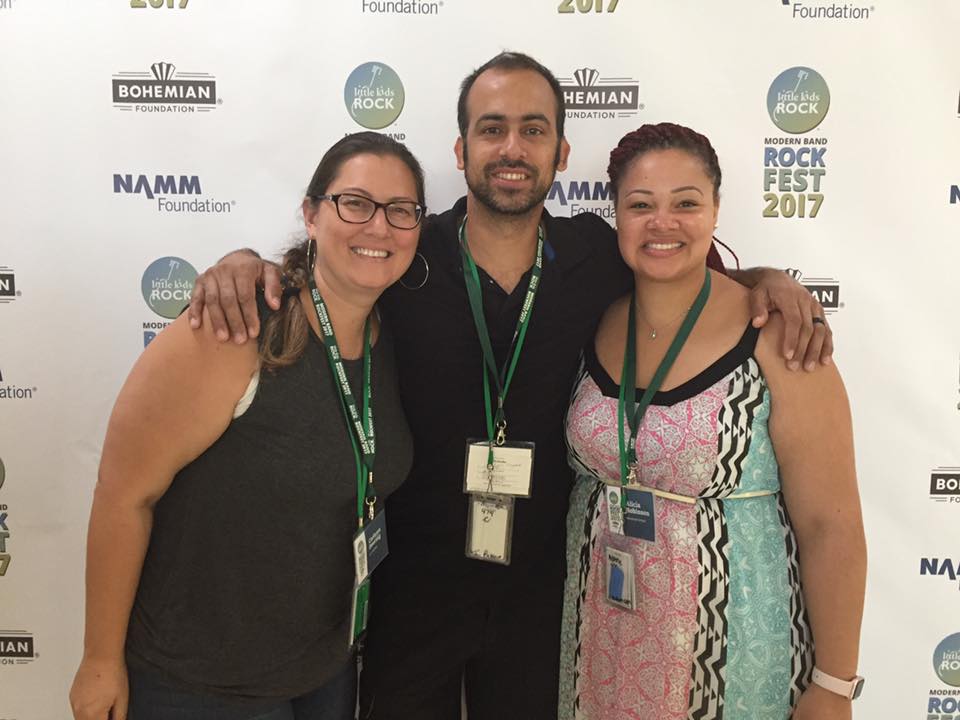 Not knowing what to expect, I walked into the room stuffed from the Airlie breakfast buffet and half asleep because of the three-hour time difference and I saw a bunch of guitars next to the seats. I thought, “Uh oh, I don’t know how to play the guitar — I’m a trained opera singer.” Well, wouldn’t you know, about 20 minutes later I’m playing the guitar to multiple rock songs. Granted, they were one-finger chords on the guitar, but by George I was playing the guitar! My food coma and jet lag dissipated and I WAS SOLD! I kept on imagining our kiddos playing these instruments with songs that they love and composing their own songs! If I could do it, anyone could do it! I was able to step out of my structured classical training and be comfortable doing something that was quite foreign to me, but something my alter-ego always wanted to do: play in a rock band!

The minute I got back to Los Angeles, I signed up for the Little Kids Rock workshops. This past summer, I attended the Little Kids Rock Modern Band Rockfest 2017 at Colorado State University in Ft. Collins, Colorado. It was such an inspirational conference, and there were so many choices of wonderful workshops to attend. It didn’t matter your skill level, there was something for everyone — from creating a scope and sequence and assessments for Modern Band implementation, to Hip Hop for positive classroom culture, to using Ukulele with technology. There was even a class for how to put a drum set together (which was really useful for me, since my drum set was in pieces all over my classroom last year and YouTube was no help).

A very powerful piece of this conference was that they had sessions and speakers on music education advocacy. As a music educator in today’s climate, arts education advocacy is one of the most powerful tools that we have for sustaining and maintaining the arts in schools. Being at this conference, there was a sense of advocacy, unity, and inclusiveness that I had not experienced in a long time. The Little Kids Rock staff was incredibly organized and had us involved in activities where we were forced (and I mean that in a positive way) to interact with educators from all over the world. If we weren’t in workshops, we were busy finding things from our BINGO game or participating in jam sessions and performing for each other. Educators came from all over the world to learn, grow, and create together for the betterment of our children. I’m not saying that Modern Band is the only answer, but if we are implementing a growth mindset and creating a culture and climate of success and joy, which Modern Band definitely creates for all (students, staff, and stakeholders), then imagine what a positive light and power that can create in our world and redirect all of the negativity and toxic climate that our society is currently experiencing.

Thank you Turnaround Arts for introducing me to Little Kids Rock. Not only has this program supported me in creating a successful music program at Florence Griffith Joyner Elementary, but it has also supported arts integrated instruction. Little Kids Rock has not only given me skills to scaffold students learning various instruments, but also to create their own songs based on different content areas that they are learning in their classes. Another great thing about Little Kids Rock is that it doesn’t matter if you are a general education teacher or a music teacher, you will get something out of the program to best fit your instructional needs and the needs of your students.