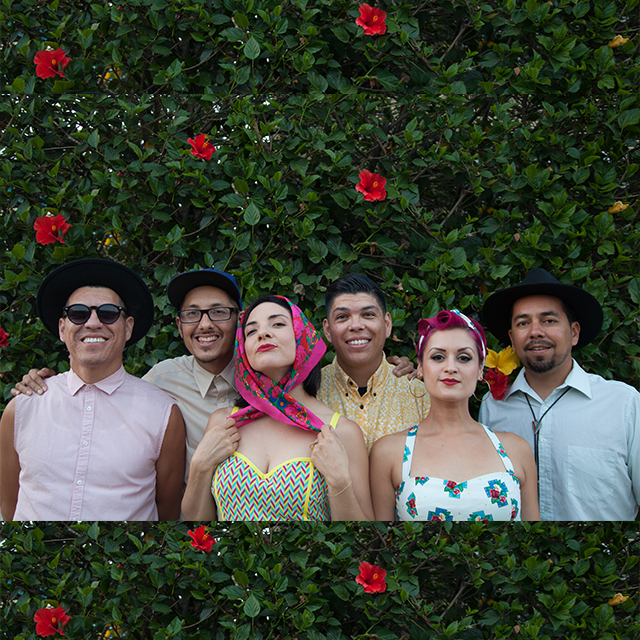 In 2005, rooted in community & tradition, a group of students learning Son Jarocho music became known as ‘Los Cafeteros,’ named after the Eastside Cafe community center, which 2 members helped found.  They soon changed their name to Las Cafeteras to honor the feminine spirit of the group. Without intending to, they organically evolved from student-group into a performance group aimed at sharing Afro-Mexican music from Southern Veracruz, Mexico in their neighborhoods.

Over the years, Las Cafeteras would develop a genre-bending sound & electric live performance infusing lyrically rich storytelling with the purpose of sharing the hidden stories of migrant life in Los Angeles. Las Cafeteras, who grew up in Los Angeles, were inspired not only from Mexican music, but from rock, reggae, hip-hop and Motown. For Las Cafeteras, it was essential to use music as a way to build bridges among the different cultures and communities that historically have had tension. Through music, Las Cafeteras were trying to help build ‘a world where many worlds fit.’

As Native and migrant children who are remixing roots music, the Las Cafeteras sound was brought to life by 4 distinct vocalist and their eclectic instrumentation, including jaranas, a donkey jawbone, a West African bass instrument, cajón, and a wooden platform used to dance Zapateado. Their 1st album, “Live at Mucho Wednesday” was a recording at the famous, “La Cita” Bar in Downtown LA. After receiving local praise for a raw and authentic sound that could not be replicated, Las Cafeteras jumped into the studio to do what no one ever thought they would do … record a real record.

The success of their first studio album “It’s Time” launched the band to new heights, placing them on stages with Mexican icons Café Tacuba, Lila Downs, Edward Sharpe and the Magnetic Zero’s & the Los Angeles Philharmonic Orchestra.  They’ve since toured North America from the Santa Barbara Bowl in California to the Lincoln Center in New York; from the Montreal Jazz Festival to WOMAD Festival in the UK.

Las Cafeteras released their highly anticipated new album in the Spring of 2017. Las Cafeteras play music with the spirit that can only be explained through an ancient African Proverb, “if you can walk, you can dance, and if you can talk you can sing.”